PRIMARY CHOICE FACTORS:
Cummins Power RentTM was selected based on reputation, fast delivery and setup, as well as the turnkey service and support capabilities of the local Cummins Power Rent distributor

BONAO, Dominican Republic – For the past 34 years, the Falcondo nickel mine in the Dominican Republic produced upwards of 28,000 tons per year of nickel and ferronickel. Located about 50 miles north of Santo Domingo, the mine site includes a metallurgical treatment plant, a crude oil processor and a 198 MW thermal power plant that supplies the mine’s electrical needs.

The mine’s thermal power plant consists of three oil-fired steam generators and three 66 MW steam turbines that generate power for the plant and provide excess power to the Dominican power grid. Each year, all three turbines have to be shut down in turn from 14 to 21 days while they are inspected and maintained. In the past, one boiler and one turbine were taken offline one at a time, while the remaining boilers and turbines supplied the mine at reduced capacity.

FERRONICKEL DEMAND PROMPTS A CHANGE
“Historically, we simply reduced ferronickel production during the thermal plant maintenance,” says Wanda Rosario, Falcondo’s senior buyer in charge of special projects. “But, the worldwide demand for ferronickel – which is a combination of iron and nickel used almost exclusively by the worldwide stainless steel industry – has become very strong. We decided it would be better to keep the mine working at full capacity by bringing in temporary rental power during the maintenance period.”

Working with Argico, the distributor for Cummins Power Generation and Cummins Power Rent in the Dominican Republic, the mine rented 32-2 MW trailerized diesel generators for a period of three months during the thermal plant maintenance. According to Luis Gigante, president of Argico, 27 of the generators operated online continuously at their 1.6 MW continuous rating, while five of the generators were used for peaking power and maintenance backups. Each trailerized rental generator is composed of a Cummins Power Generation PowerCommand® DQKC diesel generator set and its own control system and fuel supply. Each generating unit is standby-rated at 2 MW and continuous-rated at 1.6 MW. Their individual digital master control systems assure high reliability, precise synchronization with the power grid and the other generators, and maximum fuel economy.

CUMMINS POWER RENT PROVIDES TURNKEY REPLACEMENT POWER
“We provided the 64 MW temporary power plant to the mine as a turnkey project,” says Gigante. “We handled delivery of all the generating units, provided installation, commissioning, maintenance, repair and complete system operation. We even devised a system to reduce the time spent on oil changes from three hours to just 45 minutes – not unlike a Formula One pit crew.”

“Cummins Power Rent was able to complete the project – from signing the contract to system start-up – in only 45 days.”

Twenty-seven of the 32 rental generators operated continuously over the three-month maintenance period that included turbine inspections and replacement of some tube-wall panels in the boilers. Rosario says that each steam turbine needs to go through a major overhaul once every six years. Because such an overhaul can take upwards of 80 days to complete, one turbine undergoes a major overhaul every two years to spread out the impact on power production.

POWER RELIABILITY IS AN ISSUE
While the mine is connected to the national power grid, Rosario says that the grid has not been stable enough for their mining operation. “In order for us to operate 24/7, we’ve had to find our own sources of energy,” she says. “About 70 percent of the electricity generated is used in our electric furnaces. The next largest portion operates machinery such as mills and driers. The rest is service power for compressors, motors and lighting and such.”

Fuel for the thermal power plant boilers, the ore reduction process, mining equipment and the rental diesel generators is all refined on-site. Crude oil is piped from Santo Domingo to the mine’s “topping plant” which converts the oil into naphtha, diesel and fuel oil. The electrical power for the crude oil pumping station is provided by two permanently installed diesel generating units from Cummins Power Generation that together produce 3.75 MW.

If the worldwide demand for ferronickel remains high, Falcondo will continue to bring in replacement power during its thermal power plant maintenance period. The mine’s proven ore reserves should last another 15 years, and with the continuing increase in the popularity of stainless steel products, demand should remain high for the foreseeable future. In the meantime, Falcondo is doing its best to remain energy self-sufficient so it can meet the market demand. 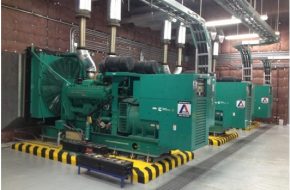 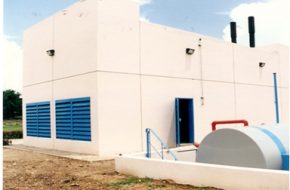 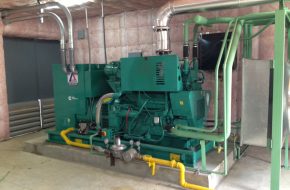